August'22 Message from the President 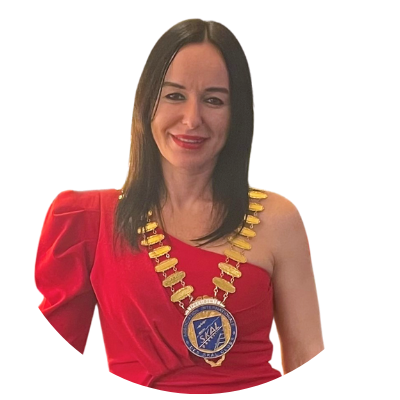 Do not stop learning, be the change!

Nokia CEO ended his speech by saying, "we didn't do anything wrong, but somehow, we lost".

During the press conference to announce NOKIA being acquired by Microsoft, Nokia's CEO ended his speech by saying, "we didn't do anything wrong, but somehow, we lost". Upon saying that, all his management team, himself included, tore sadly.

Nokia has been a respectable company. They did nothing wrong in their business; however, the world changed too fast. Their opponents were too powerful.

They missed learning and changing, and thus they lost the opportunity at hand to make it big. Not only did they miss the opportunity to earn big money, but they also lost their chance of survival.

The message of this story is that if you don't change, change will disqualify you from the competition.

It is not wrong if you don't want to learn new things. However, you will be eliminated if your thoughts and mindset cannot catch up with time.

To change and improve yourself is giving yourself a second chance. Those who refuse to learn & improve will one day become redundant & not relevant to the industry. They will learn the lesson in a hard & expensive way (Bansal, N. 2015 – Source LinkedIn).

From 2015 fast forward to 2022; after the pandemic and the disruption of industries, the change we have been discussing is here. The leaders in the industry see the disruption and the winds of change as an opportunity to rebuild this industry. Skål International, as an organization of decision-makers, carries the responsibility to be a part of this rebuilding. However, to be a leader in the rebuild, we must show that we can adapt to the changes and reflect the restructured Skål International as an organization that embraces what matters in today's world and for future generations. These are caring for our planet and our people, meaning creating an environment and representation with diversity, inclusion, sustainability, and equality in mind. The longevity of Skål International will depend on how we meet the expectations of the new generations and disruptions in the working environment, which will allow us to understand what enhanced membership benefits will attract new members to our organization.

Acceptance precedes change, and our first step in this cycle of change is an acceptance that moving from the past is necessary!

Many of us get stuck in the past because of our need for certainty. Certainty is one of the six basic human needs and is fundamentally about survival. Moving on from the past also means stepping into the unknown future. It means having the courage to let go of what is familiar – even if it is negative – and being vulnerable enough to embrace and learn from what is ahead.

To implement successful organizational change, all parties must agree; otherwise, change will never occur. Even though different factions influence members, it must be remembered that we are all working for a better future and that differences should always be discussed before presenting a united front to the members.

Inclusion offers the opportunity to create a space where everyone is invited into the conversation and appreciated for their contributions.

Invite people rather than call them out, encourage change rather than demand, and allow people to be heard so you can build trust in your organization... This has been my goal and intention for my Presidential year.

After the EOGA on July 9, 2022, the Governance and the Statues & Bylaws committees replied to my call, went back to work, and reached a final consensus to be presented to the membership. The EB reviewed it on August 10, 2022, at a special meeting and approved it to move it forward for it to be presented to the membership at the Annual General Assembly that will take place at the Skål International World Congress in Croatia in October. The proposed amendment to statutes will be shared with membership 45 days in advance of the AGA for their review, and their AGA will be the platform to discuss and vote for the proposed plan for the second time. If approved, the plan will be effective in 2024. The year 2023 will be the transition year.

I wanted to share and remind everyone of the story of Nokia, a company we all know very well and have respected in the past. The story is simple and clear; they were successful, no doubt, but they were late in adopting changes, and in the end, as their CEO announced plain and simple, they lost because they failed to accept and adapt to changes.

I want you all to rethink your position for change, considering this industry giant and its story and the times we are at are more fast paced than they were ten years ago. If your company or organization is not going to adapt to rapid and expected changes in the new world and future, you will not succeed.

Always, in friendship and Skål,

July'22 Message from the President